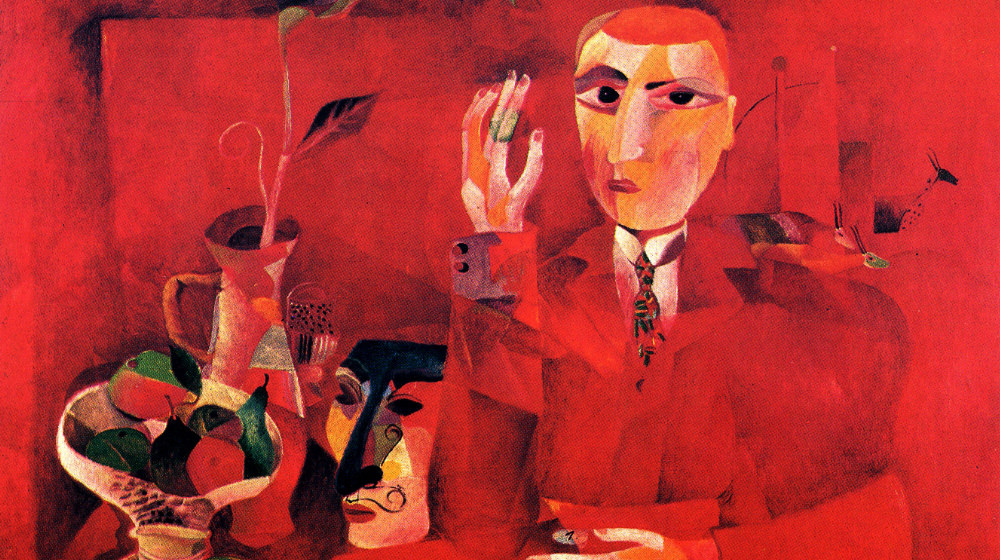 HIS BEGINNINGS IN THE RHINELAND
Heinrich Campendonk was born in Krefeld in the Rhineland in 1889. He completed an art course at the local school of arts and crafts. Campendonk’s teacher, the Dutchman Johan Thorn Prikker, had a significant influence on his studies.

HIS YEARS IN UPPER BAVARIA
Heinrich Campendonk had received an invitation from Franz Marc, August Macke and Wassily Kandinsky and so he set off in October 1911 to visit them in Sindelsdorf – Upper Bavaria, Penzberg railway station, as he subsequently wrote in his letter-heads. This was the beginning of a ten-year stay in the vicinity of the then coal-mining town of Penzberg, namely in the villages of Sindelsdorf, Urthal and, after his military service from 1914 to 1916, Seeshaupt on Lake Starnberg.
Campendonk was formed by his encounters and experiences during this decade, above all by the lively exchange of ideas with the friends he had found in the painters of the Blue Rider.
Heinrich Campendonk participated in the first Blue Rider exhibition at the Thannhauser Gallery in Munich in 1911. He exhibited further. 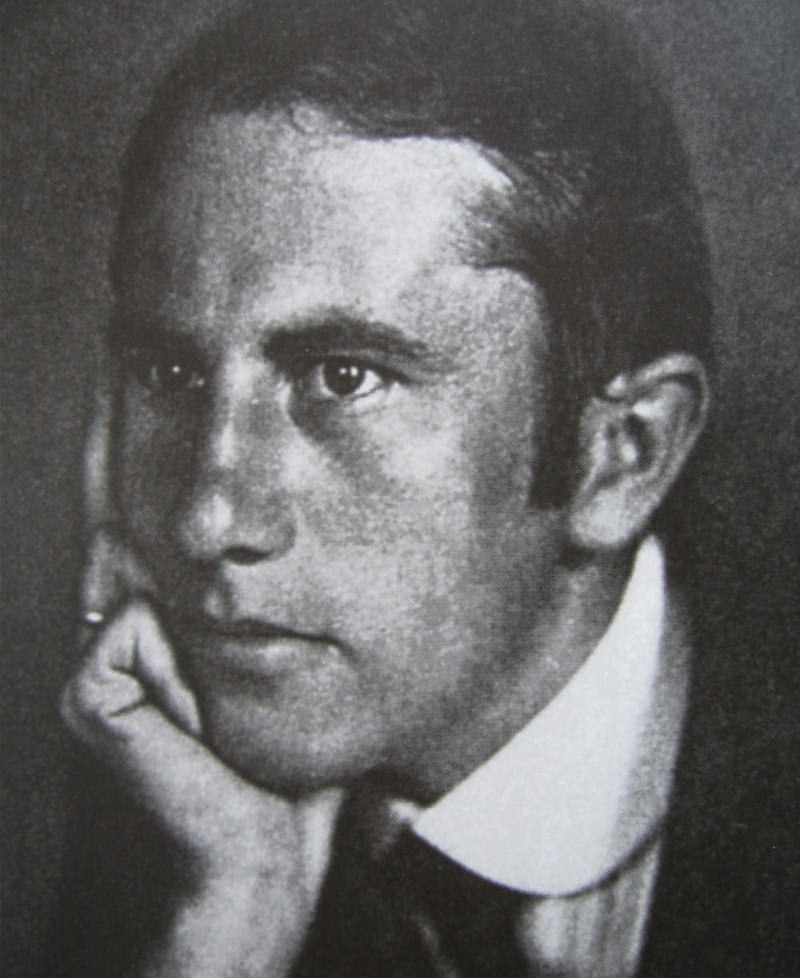 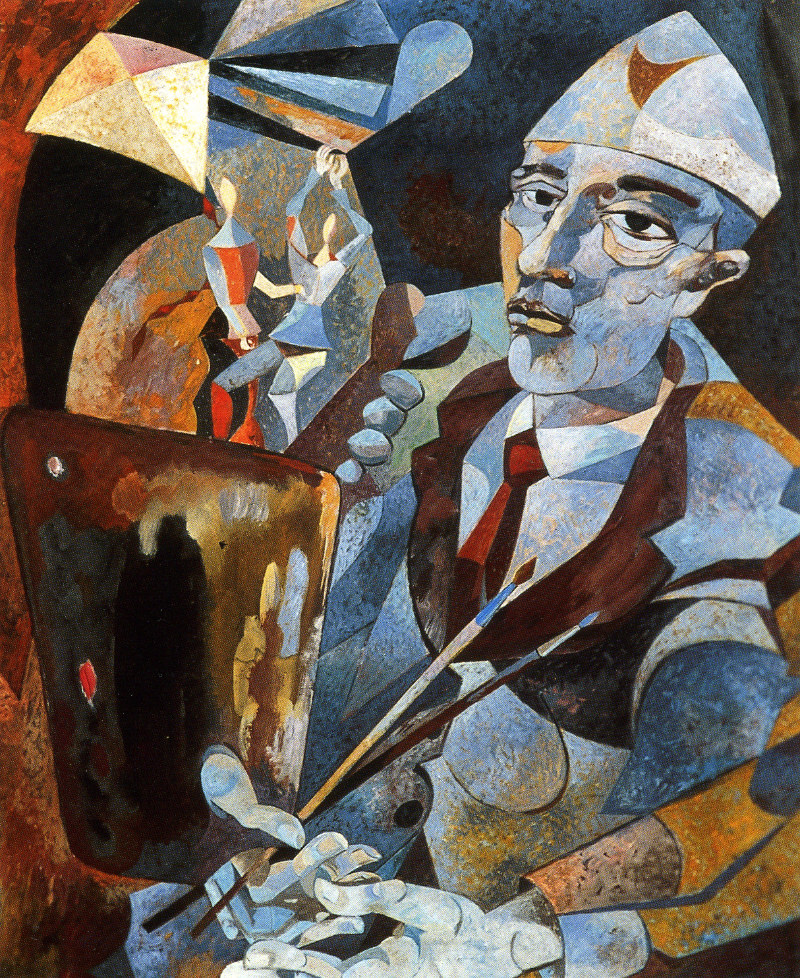 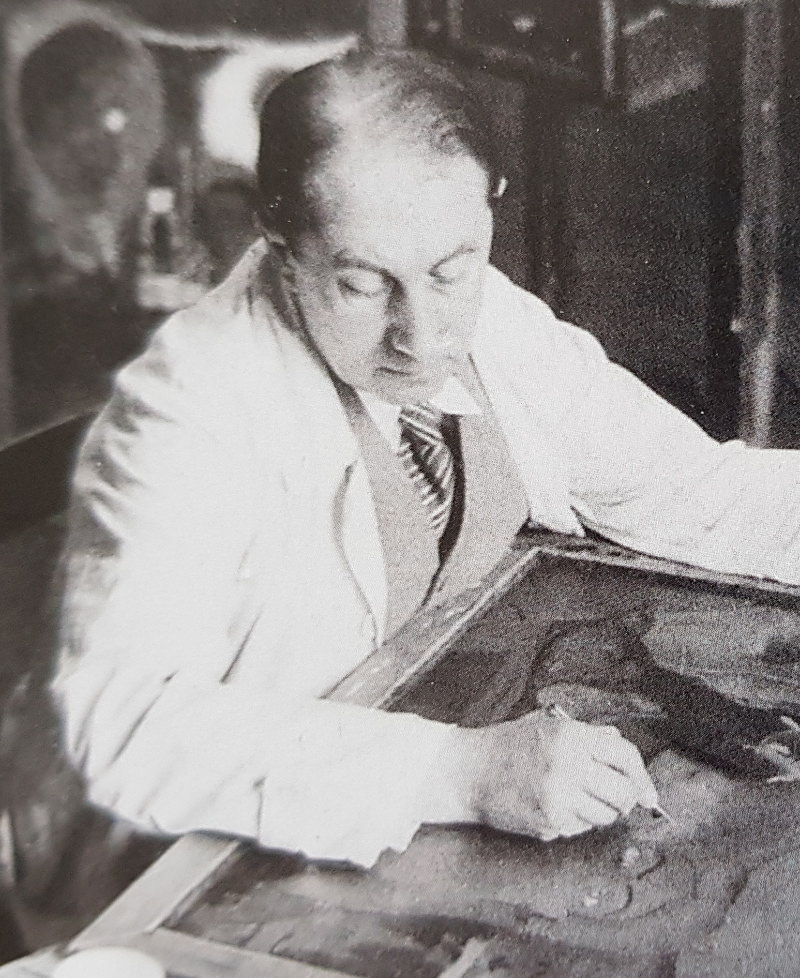 Collectors like Bernhard Koehler were interested in his work and galleries showed and sold his paintings, which afforded him financial security. In 1913, he took part in the exhibition of “Rheinische Expressionisten” in Bonn and in the “Erste Deutsche Herbstsalon” in Herwarth Walden’s Gallery DER STURM in Berlin, one of the most important exhibitions before the First World War on so-called “Classical Modernity”, his work receiving ever more acclaim.
Being impressed by the ideas of the “Räterepublik” which had been proclaimed in Bavaria after World War I, Campendonk painted the so-called Penzberg Pictures in 1919, whose motifs were based in a variety of ways on the life and times of Penzberg as a coal-mining community. Looking back, we can say that he hereby established a monument to the town in the history of art.
In the Upper Bavarian period of his artistic development, Campendonk established an opus that is internationally recognized today. Seminal works were produced in a whole range of techniques, from oil paintings to watercolors, from ink sketches to paintings on glass and to wood carvings.

“Glück auf!” Penzberg and its colliery, 1796-1966
Penzberg, first mentioned in records in 1275, is situated around 50 km south of Munich in the Weilheim-Schongau district of Upper Bavaria. The history of Penzberg as a town in its own right began at the end of the eighteenth century with the systematic mining of coal deposits that had been discovered there. In response to the steadily increasing population, the mining company began in 1871 to build houses for its workers, these dwellings becoming one of Heinrich Campendonk’s motifs. The “Penzberg Workers’ Colony” was thus established, a network of roads at right angles to each other lined by houses of uniform ground plan, which can still partly be found in today’s townscape.

The colliery was closed down in 1966 as it was no longer profitable, and Penzberg has since developed into a medium-sized town with trade and industry incorporating a major pharmaceutical company, and offering a whole range of services. People from the surrounding area enjoy shopping in the town where almost 17,000 people live and work. 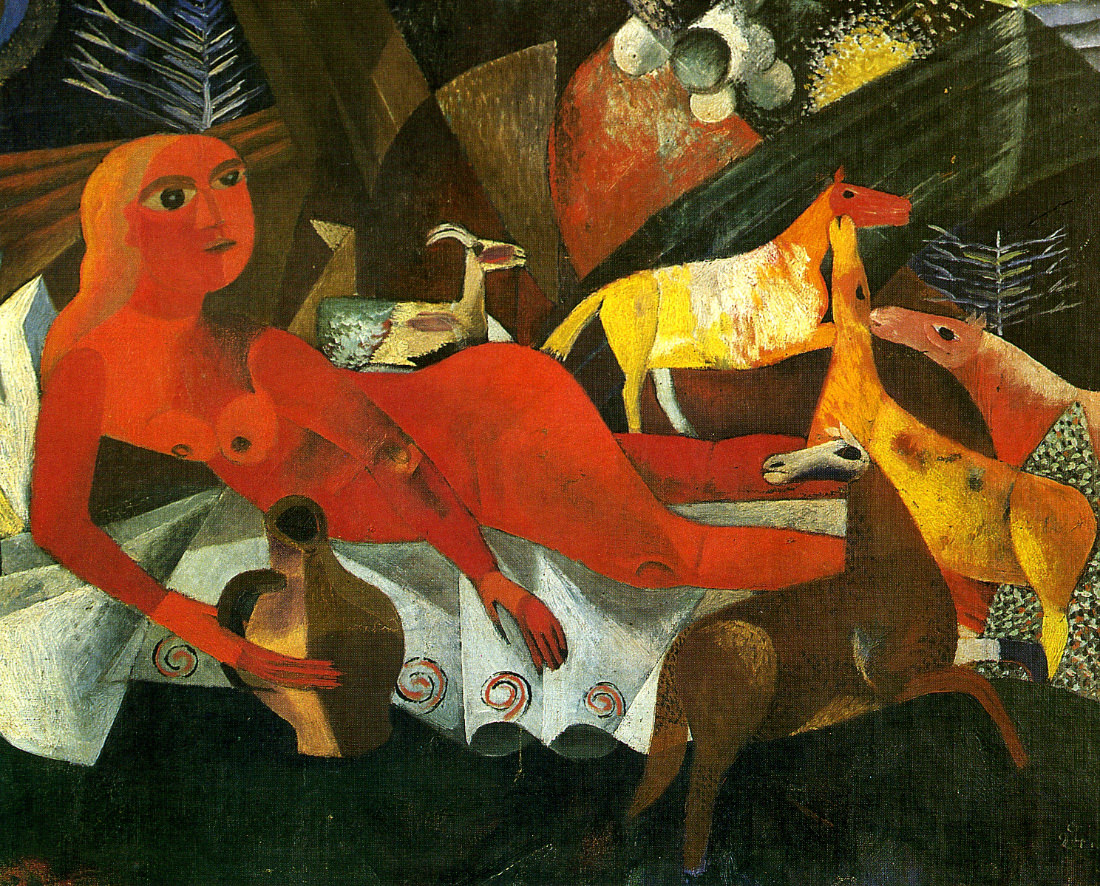 BACK IN KREFELD AND DÜSSELDORF
Heinrich Campendonk returned to the Rhineland at the end of 1922. In the following years, his work was dominated by large-sized pictures and glass paintings. He had had good contacts to America since 1921. So in 1925 he was able to stage a first exhibition in the Daniel Gallery New York devoted solely to his work, 1931 another one in the Museum of Modern Art New York.

THE NATIONAL SOCIALIST REGIME AND HIS EMIGRATION TO HOLLAND
After the National Socialists had come to power, Heinrich Campendonk was forced to relinquish his position at the Academy in 1934. He emigrated first to Antwerp, then went on to Amsterdam where he was offered a chair at the Rijksakademie in 1935.
Many of Heinrich Campendonk’s works in German museums and galleries were confiscated as “degenerate art” in 1937. In the same year, a stained glass window, called Leidenswerkzeuge or Passionsfenster, referring to elements of Penzberg’s history won the Grand Prix at the world fair in Paris, competing with Pablo Picasso’s Guernica.
Heinrich Campendonk was repeatedly subject to reprisals after the German army had invaded the Netherlands
in 1940.

NO RETURN TO GERMANY?
After the end of World War II, Heinrich Campendonk was able to pick up where he had left off. He participated in exhibitions in Germany and the USA, and a number of glass windows were commissioned. He was interested in returning to Germany, but bureaucratic hurdles and health problems prevented his doing so.  He retired in 1952, and in 1955, some of Heinrich Campendonk’s works were displayed at the documenta 1 exhibition in Kassel. He was honoured by the city of Amsterdam and the Dutch government in 1956. Campendonk died in Amsterdam in 1957 and was buried in Buitenveldert cemetery. 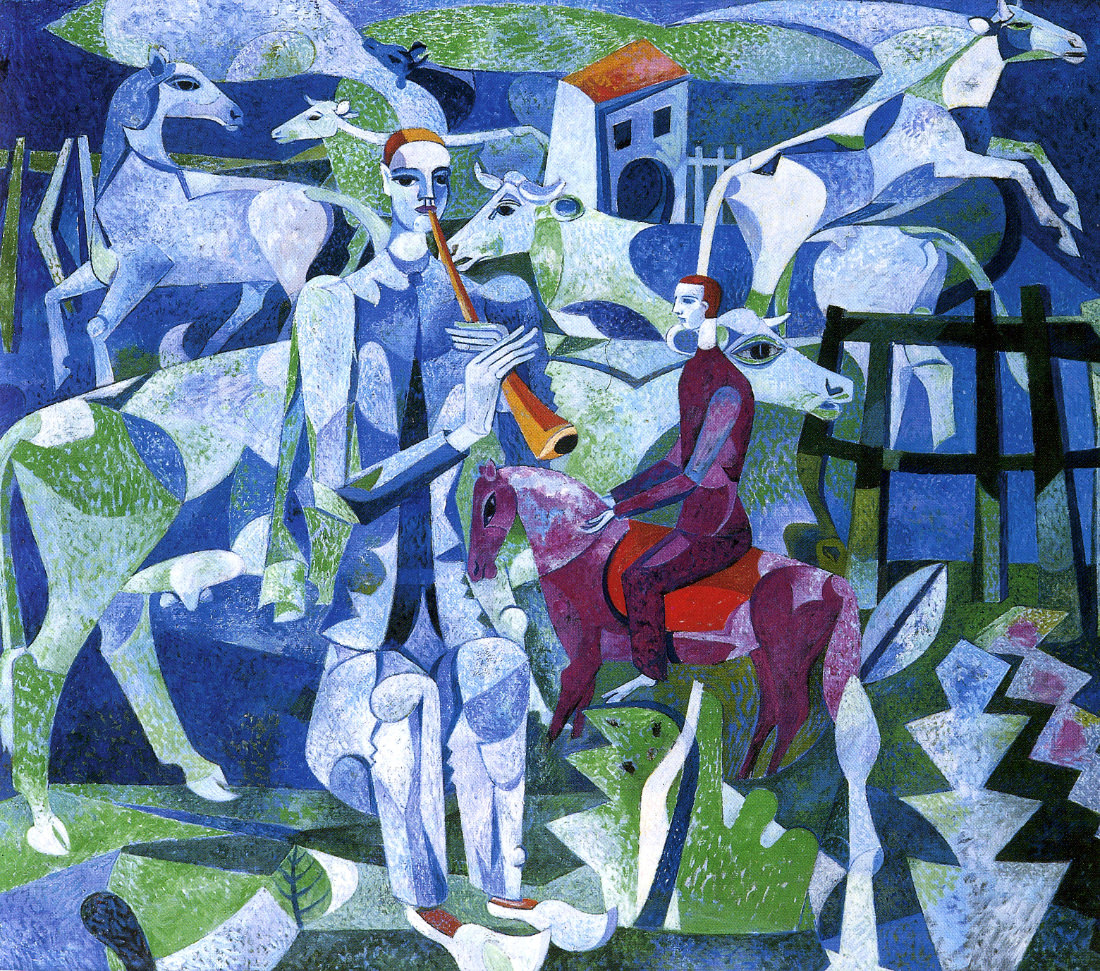 Since around 2000, his work has been increasingly shown at public exhibitions, and numerous publications now document the life and work of the artist. Several representative and internationally acclaimed exhibitions, including works of art by Heinrich Campendonk, have been presented in Penzberg since 2002. The Campendonk exhibitions honour his affiliation to the Blue Rider group and his connection to Penzberg’s city history.

In 2010 numerous works from Heinrich Campendonk’s estate were acquired by a patron of the arts and presented to the town of Penzberg on a loan basis. The museum received further pieces, showing the different phases of his life, for the opening of the »Museum Penzberg – Sammlung Campendonk« in 2016.

This collection is on show at the museum, which houses currently the world’s largest collection of Heinrich Campendonk’s works. There are a variety of different exhibitions, with the focal point being the extensive collection of beautiful reverse glass paintings. Like no other artist from the Blue Rider group, Campendonk remained true to this special manner of painting for 40 years.

FOR ANY QUESTIONS, PLEASE CONTACT US:
Freundeskreis Heinrich Campendonk